Currently can’t stop blogging. This whole wordpress thing is pretty addicting. And it’s awesome because it gives me a justifiable excuse to be introverted. Frankly, I can be pretty social too. When I’m around my people who I feel at ease with, friends, mentors, family (for the most part), I talk and joke and laugh and want to do fun things with them. I moved to a new place in a new state alone a few months ago and it’s been an interesting journey to say the least. In order to find out anything about where I’m living I had to go out and meet people.

The first event I attended was a free Thanksgiving dinner at the Baptist church down the road. I made a dish and walked over by myself. Or at least I tried to, first I went the wrong way and a woman was walking the other way whom I asked “are you headed to the dinner?” to which she replied “yes, are you? But it’s the other way!”. And so we walked together. Thanks Jean.

She introduced me to several people who I hit it off with immediately– mostly older people, in their 40s, 50s, and 60s. The island I live on is small and most people you see will have at least a few grey hairs. I almost prefer it that way. Moving here was a relief after coming from a college culture where I felt pressured to wear certain clothing and judged if I didn’t partake in certain activities. And I’m not gonna lie, I did party some. But I started in high school, and a lot of the effect wore off after the first two years of college. By junior year I was hiding upstairs in my room when my roommates threw big parties downstairs. But what did I expect? We all knew that we were moving into one of THE party houses that people knew of. Year after year of parties took place at that house. But cool parties. Not frat parties. Or lame dance parties. We had themes. And 80% cool people (there’s always a few uninvited/friend-of-friend stragglers thrown in) who cared about the environment, the outdoors, played music, liked to cook and be creative. And smoke pot. Which is for another post.

The outdoors part was the main reason why I chose to move into the little house on Edward’s Street. The house had a history of Outing Club members living there whose company I enjoyed. Whose legacy I wanted to prolong. Edwards St. couldn’t fall into the wrong hands! The magic couldn’t be thrown away!

Outdoors is where I want to live. I love it. As much as seem like I’m hiding myself away in my room sometimes, it’s usually because I’m planning something big. Some big adventure. Right now it’s the Long Trail (LT).

272 miles. I’m going South to North. Starting on the Massachusetts/Vermont border and finishing in Canada. This is my second long-distance thru-hike to date. Last September, I completed the John Muir Trail in the Sierra Nevada mountains in California. 242 miles overall, including side trips to resupplies. The LT will end up being more than 272 miles once I calculate the miles taken to resupply on food.

There is a way to go ahead of time and stash food in different cache spots so going off-trail isn’t necessary, but I just LOVE the trips into town to eat at a restaurant and order what me and my BFF call “Bad-Food”. Everyone knows what we’re talkin’ ’bout here. [Veggie] burgers and fries with a milkshake. The calorically dense foods that one’s body craves after expending three times as much energy as it’s being replenished with for dayz. Gawd I love backpacking. 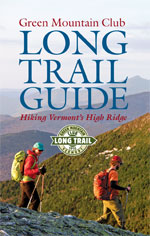